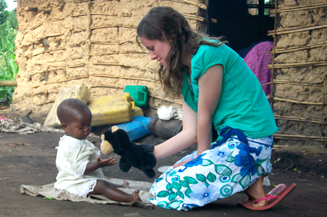 A few years ago, I went with a couple of friends and a bunch of teenagers (who have become friends), to Uganda. Their parents placed their well-being in my hands for two weeks, which I’m sure they reconsidered when we had to stop the bus on the way to the airport because I’d forgotten my passport.

Our hosts in Uganda, Eve and Herbert suggested we go on a road-trip with them to Kamwenge which was a nine-hour drive away. Eve and Herbert are fabulous hosts and let us ask lots of questions about culture and life, explaining what things look like from a Ugandan perspective. They are also prize jokers and could have exposed us as gullible at any given point. They’re able to bring such a balance, explaining social issues surrounding orphans, playing pranks on us and helping us understand that occasionally, Ugandans get the L and R sound mixed up.

Now, I don’t know if you’ve ever been on a bus with teenagers for that long, but it certainly was an experience. There was singing and puppet shows, some sleeping through this mayhem, no escape from sweaty feet and lots of deep and meaningful chats in the midst of this. There’s something about being on a bus for that long that really bonds you together. It was one of the most memorable journeys of my life, for lots of reasons. Let me tell you about it.

On the way, two of us started feeling really sick. I had phoned home for advice and was awaiting a call-back. We went into a service station for a break and without going into too much detail, all you need to know is that the toilets were long-drops and my phone fell out of my pocket in slow-motion. I watched our contact with home literally fall down the toilet. I stood outside the cubicle and puzzled with the teenage girls. We wondered what to do, or who to rope in to help. After a few minutes, I went to speak to someone about it and when I went back into the toilet I found Beth with her hand in two carrier bags ‘fishing’ for the phone. Wow! Beth had courage that surpassed my indecision. She has a heart of service that doesn’t mind getting her hands dirty. The phone never worked again, but that’s not the point!

This place doesn’t receive many visitors as it’s so far out and especially fewer sporting fairer skin. It’s just not normal for white people to be seen out there. On a journey like that, it turns out you need quite a few toilet stops. Thankfully, I only remember the first and last one! Eve and Herbert advised us that there would be a ceremony when we arrived at our destination school and it was better for us to go now. We all piled out, boys lining up at the back of the bus and girls seeking a little bit of camouflage in a cabbage field. We all ducked low and then I heard one of the girls calling, “Ruth… ooh… Ruth”. Once I was able (if you know what I mean), I turned around and saw a woman with a machete too-close-for-comfort, striding down the side of the field a mere few feet from me. This definitely ranks as one of the strangest experiences of my life and I’m guessing of hers too. We did the strangest thing though, we acted like it was no big deal for us to use a cabbage field as a toilet and she barely batted an eyelid at the selection of pink bottoms facing her as she went about her daily routine. We arrived at the school shortly after, relieved in more ways than one. Bladders empty and most of us full of joy we watched the great school performance of singing and dancing before the headteacher invited us to clap our hands. We had momentarily forgotten about the L and R language difference so I had a benchful of teenagers holding back laughter-tears.

Our comfort zone was also challenged in Kamwenge when we went to the Easter market. As the bus pulled up, we watched the hustle and bustle as people followed the path of the stalls to the top of the hill. As I mentioned before, we were made to feel so welcome by our hosts and learnt a lot about generosity there but it’s just not a place that’s used to receiving Western guests so you can imagine the surprise when we spilled out into their annual celebration.

We walked to the top of the hill, trying to engage with local people and appease their suspicion. The stall-holders turned off their radios and conversations were hushed as the flock of white people made it to the top of the small hill. Our hosts, Eve and Herbert explained that although we might look different, we were all there to celebrate Easter together and some laughter and chatter broke the awkward silence. We were all put at ease and brought together over our identity in Christ and newly found penchant for sugar-cane. I’ve never felt so honoured and welcomed as I did in Kamwenge. We were invited into peoples’ homes, given gifts of pineapples (Ugandan pineapple is better than any other pineapple in the world, I’m convinced). A lady actually knelt before me and kissed my hand and the family we stayed with killed their goat for us to eat. I will never forget their generosity, especially when we understood that eating goat would be for a couple of times a year. I find it hard to accept what they did for us and hold on to that feeling, alongside feeling like an outsider at the market for the first time in my life. These feelings make me more than a little uncomfortable and deposit a little inside me about what it means to be in a minority and also what it is to receive what isn’t deserved. It’s a picture of isolation and grace, the contrast of difference and welcome.

We like to flock, don’t we? I’m sure I’ve turned down invitations because there are not people like me going to a party. Let me get this straight, I’m not talking about race here. It’s more that thing we do when we’re feeling insecure. There’s nothing wrong with ‘flocking’ as such, or having people who are similar around you. I’m more concerned about that instinctive urge in me to shrink away instead of changing both myself and the atmosphere around me.

The night before we flew home, we had a celebration with our hosts at Wellspring, eating, talking about our times together, laughing and joking. Pastor Patrick gave a great speech about our visit and there was much joy all around. Towards the end of the speech he declared to us that, “It has been a PRESSURE to have us stay!”. Our faces dropped and our hosts quickly stepped in, reminding us that is was indeed a “PLEASURE.” We breathed a collective sigh of relief and then all fell about in hysterics when we heard the invitation, “Let us play!”
I can say to you, with confidence that those few days changed me. I went to make a difference in the lives of the people I was working with, both Ugandan and UK youth, but the real change is from within. It must be; I’m still talking about it several years on! This post comes with an invitation, as we get ready to launch the applications for our trips this Summer. Will you start writing your own adventure that literally transforms you and those around you? It will most definitely cost you; financially and personally but the pay-back, the return will be with interest.

Adventure anyone? Why are you still here?! Get planning, get ready!