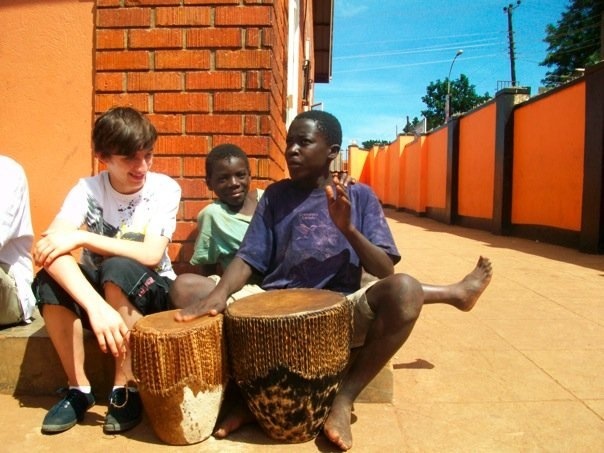 Geoff drumming on a visit to Tigers project after recovery!

We were all packed up and ready to leave for Kamwenge and Geoff and I decided to brave the journey even though we weren’t feeling very well. I won’t go into details, but it’s safe to say we were both nervous about being more than two metres away from a toilet. We all piled on the bus, anticipating the journey ahead and we’re very glad when we’d reached our destination a good nine hours later. Geoff and I braved the ceremony and latrines, now feeling very uncomfortable and hazy. Our hosts suggested a visit to a nearby hospital just to check us out. I was reticent to accept treatment without contacting our insurers, which was now near impossible having dropped the phone down the toilet on the journey and it was now drying out in the futile hope it might turn on again- one of us would be brave enough to hold the contaminated object near to our faces, anyway. Our hosts insisted we took a quick check-up just to ease our minds and so we were bundled into the bus and went to the hospital.

I remember the hospital being up a small hill, glowing lights visible from the road. The pathway up was dark and we were both struggling. As we approached the illuminated building, we heard cries of pain. They sounded deep and terrifying. Geoff, aged seventeen at the time, grabbed my hand and squeezed; hard. It wasn’t a I’m-so-glad-I’m-here-with-you squeeze. It was more of a please-God-don’t-let-them-do-that-to-us squeeze. I’d like to say I was the ultimate youth leader and offered just the right words to calm and sooth. I was as scared as Geoff and gave his knuckles an equally-pressured crush. As we drew closer to the building, level with the windows, I was shocked to realise there were no curtains covering the windows. Not as shocked as my seventeen year old ally though, who had already caught a glimpse of the patient, lying in a bed in the far corner. The agonising shouts had come from her; it was clear now, as she lay with her legs up, two nurses attending to her as she prepared to give birth!

Geoff and I were ushered into a waiting room, a thin-wall away from the labouring mummy. After a while a nurse came through and introduced herself as Veronica and asked us to introduce ourselves. She considered her care plan for us after weighing one of us and taking the other’s blood pressure and then announced: “This one is too fat and this one is too thin… I feel though, You Will Be Fine!” with her hands clasped closely to her chest, indicating that the examination was over and her certainty over our health. We sneaked puzzled glances at each other throughout the examination, too ill to laugh at the time (which is quite significant of you know me!), but were flummoxed as to the prognosis as how paracetamol might help us get through this sickness. It was apparent the Veronica had seen people much sicker than we were and her experience was valuable and delivered with sensitivity. Veronica prayed for us and asked us to pray for her, her family and colleagues. Then, our eyes widened, as from next-door we heard the unmistakable cry of a brand-new baby and the combined joy and relief of Mum and her nurses.

Geoff and I stood up as well as we could, bade farewell to Veronica and walked back down the path to the bus, glimpsing into the room at the new mum and her bundle. We don’t know what challenges are before the little family, hoping and praying they they are both well and fine too. Although we felt rotten, Veronica was indeed right; we were fine. It was a funny night and her words have often played in my head, in the toughest of moments; “You Will Be Fine”. Whatever your tough moment consists of; “You Will Be Fine”. If it’s more than a moment; “You Will Be Fine”. It speaks of hope and an unbeatable we-will-get-through-this spirit. There’s a risk of pretending here, or inflicting a fine-ness on people who are not fine; that’s the warning on the label of using a dose of Veronica’s medicine. Otherwise; use for the relief of hopelessness, when required.